Hello friends! Welcome to another review of cool independent horror by your old pal, Skull. This time around the featured author hails from the mythical emerald isle: Ireland. Aidan Lucid can certainly tell a fine tale and this one is set in the modern day. But the evil past has a strange way of forcing its way into the present, making life very interesting, or even terrifying! Ready to find out more about The Scavenger? Then let’s head for the halls of Hopps Town High School. The bell’s just rung, maybe we can catch sight of some the characters…

There’s seventeen year old Jared Duval, a handsome African-American teen who’s a huge Will Smith fan and does everything he can to be as cool as “The Fresh Prince”. Unfortunately, he’s being hazed by some bullies who don’t like his passion for the same sex. Even his own mother gives him flack for being gay!

Jessica Barlow is just trying to stay alive long enough to graduate! Her divorced mother is a very angry person who seeks refuge in the bottle, but all that does is make her into a dangerous monster that beats and screams at her only daughter.

Adrian is a tall, athletic teen who appears older than he is. From the outside, his life may look ideal. He’s a popular soccer player who’s handsome to boot. But in reality, he’s tired of his overprotective dad and still misses his mom, who died in an accident seven years ago. He’s also lonely and wishing for female companionship.

As if these teens don’t have enough on their plates, they’re soon the victims of an angry spirit after doing what seemed like a positive thing. Upon discovering an old well on the outskirts of town, they all make a wish in it for their heart’s desire. They don’t expect anything to change in their difficult lives, so it seems like a dream come true when they do. However, it’s not long before flaws start to show up in this new “perfection” and they do so in horrifyingly drastic ways. It’s almost as if someone or something lifted them up just make their lives even worse hells than they were before. At first, the three friends don’t share their wonky experiences with each other. But when they do, Adrian, Jessica, and Jared realize that they’re all having similar things happen to them and it must have something to do with the well they wished at.

After some online sleuthing and a meeting with Adrian’s uncle, Tom, the teens find out that a dead body was dumped into the well back in 1979. Not only that, but its owner Caleb Hammerson was killed in a mystery attack. However, Hammerson was a cruel racist with a viscous hatred for the black community, which only got worse during his tour of duty in Vietnam. Upon his return, he became known as The Scavenger and perpetrated many an evil act against the African-American residents of Hopps Town. So, he wasn’t someone the town grieved over.

Knowing who is attacking them and why is good information to have, but what are the teens supposed to do with it? How can they make Caleb stop his reign of terror? It’s not like they can just call “Ghostbusters.” Luckily for them, Jared’s Aunt Maybelle pays a visit and gives them hope. Maybelle has the gift of being able to see and speak with the dead. But even she is concerned about the strength of Caleb’s spiritual powers. Will they be able to banish this evil being, or are they just opening Hell’s Gate to let even more trouble in?

Damaged Skull Reviewerrates The Scavenger FIVE STARS! Aidan Lucid has written a tale that champions diversity and roots for the underdog. His characters are believable and bring us hope in a world of gay bashers, sex criminals, and substance abusers looking to hurt others. Lucid takes on racial issues in a constructive way that avoids plastic stereotypes and points out that conflicts are rarely clear cut. Life is difficult, but worth the effort required to get where we want. And if you have a special calling? Don’t ignore it. We need you! A highly recommended read.

Want more information about Aidan Lucid and his other works? Check out the links below

Thanks again for checking out Damaged Skull Writer and Reviewer! Hope to see you soon with more news and reviews from The Skullcave. You never know what we’ll dig up next! 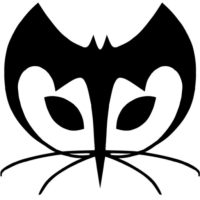 Serotonin publishes poetry and prose on mental illness and suicide prevention. Trigger warning: themes of trauma, abuse, and self-harm throughout.

The man your librarian warned you about...

Nothing to See Here

Rants and Writings by Madison McSweeney