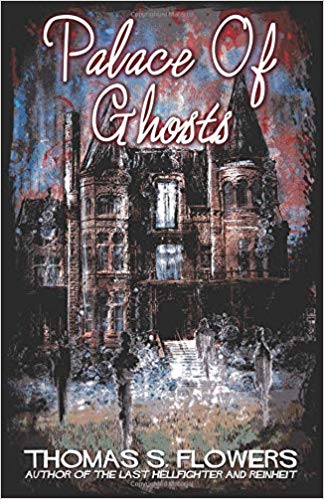 Holy horror guys and gals! I just finished reading Palace Of Ghosts by Thomas S. Flowers and was absolutely floored by how good it is. Looks like another hit for Shadow Work Publishing! Seriously, the closer I got to the conclusion with my reading, the more I had to keep going. This book will make you stay up late and find excuses during the day to get back inside Amon Palace. Flowers’ writing is sharp and insightful with an incredible eye for detail. Descriptions are great and not cluttered, while conversations bloom organically. From the minute you start reading, the buildup of suspense is done masterfully. While I could go on for a long time about how great this book is, I think you’d rather take a peek inside, right? Okay then, follow me and stay away from the red door!

Palace of Ghosts starts off with one Dr. Frederick Peters talking with police detectives. It seems that something has gone seriously wrong during a special study he was doing with four veterans of the Iraq conflicts. The police are having a hard time believing Dr. Peters in light of the knowledge they have about the big old mansion he invited his patients to. The place goes by the name Amon Palace, a location regarded as being strange and creepy. Not exactly the ideal joint to house men and women with Post Traumatic Stress Disorder. If that wasn’t enough, Peters keeps telling them that he rented Amon Palace from its current owner and that it was staffed with a cook and a caretaker. But how could that be? The huge old house has been abandoned for over thirty years! Is it possible that, somehow, both parties are right?

Two things are indisputable. Amon Palace has been reduced to a charred husk by fire and six people are missing. What the hell happened? While one officer just wants to slap the stunned doctor into a cell, the other decides they should at least tape the guy’s story while he’s still talking. The parents of these people are at the station looking for their children or at least some answers. But the tale that Peters tells them is something out of an opium dream or a badly deranged mind to say the least. Flowers uses multiple points of view to give us the best overall view of the sequence of events once Dr. Peters gets the ball rolling. So you better sit down, shut up, and hang on because Palace Of Ghost is one hell of a story!

Four veterans arrive at Amon Palace on Galveston Island to spend a week with their psychotherapist doing some really intense work on the sticking points in their recovery from PTSD. That’s the plan, plain and simple. But even just pulling up to Amon Palace, they all feel that something is very different about this house. Marcus Pangborn tells the other three what he’s learned about the house and its mysterious past. Built by Sir Christopher Driscoll in the late 1800’s as a sanctuary he could be comfortable in as a leper, the house survived a horrible flood in 1900 even though the owner disappeared. It was rumored that Driscoll practiced the black arts and there was a red door with strange symbols carved into it which seemed to confirm this. Through the years, Amon Palace was passed to various Driscoll family members who all seemed to be rather eccentric. In 1963 the huge estate got some media attention when Amy Grice, a family friend, committed some grisly murders there. Thereafter, people believed that Amon Palace was haunted by multiple demons and not a wise destination choice.

What a great location for some very volatile people to hang out, right? Oh, and they’re locked inside. If they leave the property, the patients forfeit their last chance at returning to any sort of “normal life.” Dr. Peters is confident that he can “fix” these long-term victims of PTSD by using some revolutionary techniques. For Brad Myers, Samantha Green, Andy Lovejoy, and Marcus Pangborn this chance seems too good to pass up, so they accept the rules and conditions. Wouldn’t it be great to not always be an outsider? Or to not be afraid all the time? Maybe they could actually have relationships with other people that don’t end in fierce arguments. And maybe, just maybe, they could relax and finally be…happy. There is a LOT riding on successful completion of the program and Dr. Peters has the only key to the very sturdy oak doors.

It doesn’t take long for the idyllic veneer of the place to crack and unexplainable things to start happening at an alarming rate of speed. Dr. Peters keeps telling the patients that nothing can hurt them while they’re inside Amon Palace, but he hasn’t been totally honest about a lot of things. How come it’s so cold inside if just outside is a Texas summer? Who are the caretakers of the property really? What’s going on in the freaky library? Maybe the biggest question of all is, should the patients open the red door or just walk away? The answers seem simple but not when Amon Palace is at the peak of its powers and growing stronger all the time.

The verdict? Five Stars all the way! Palace Of Ghosts is also going directly to the “Wall of Fame” after I finish writing this review. If you are a fan of Hell House by Richard Matheson or enjoyed the recent Netflix adaptation of Shirley Jackson’s “The Haunting of Hill House” then you will LOVE this excellent novel by Thomas S. Flowers! He combines a heartfelt addressing of PTSD with a horribly shocking story that literally gallops into its ending. It feels like a ride on some heavy drugs and gave this reader a wobbly, hallucinogenic feeling which was really frightening at times. You’re freaking out reading Flowers’ words, but unable to put the book down because you need to know what happens! Everyone should get themselves a copy of Palace Of Ghosts especially those looking to understand the mysteries of PTSD. I feel genuine gratitude that someone who understands has written a book like this and think that others like me will feel the same.

2 thoughts on “PALACE OF GHOSTS by Thomas S. Flowers Is An Amazing Fusion of Horror and The Hell of PTSD That Makes For One Terrifying Read!” 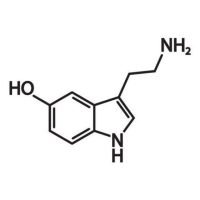 Serotonin publishes poetry and prose on mental illness and suicide prevention. Trigger warning: themes of trauma, abuse, and self-harm throughout.